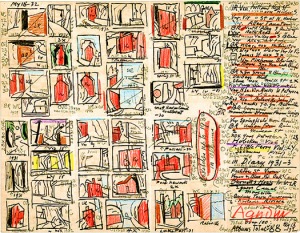 In an interview with Spiegel in 2009, Umberto Eco discusses an exhibition he curated at the Louvre and its accompanying text, which he edited, called The Infinity of Lists.  Of lists, he says:

The list is the origin of culture. It’s part of the history of art and literature. What does culture want? To make infinity comprehensible. It also wants to create order–not always, but often. And how, as a human being, does one face infinity? How does one attempt to grasp the incomprehensible? Through lists, through catalogs, through collections in museums and through encyclopedias and dictionaries. There is an allure to enumerating how many women Don Giovanni slept with: It was 2,063, at least according to Mozart’s librettist, Lorenzo da Ponte. We also have completely practical lists–the shopping list, the will, the menu–that are also cultural achievements in their own right.

Yes.  And another cultural achievement is the top ten list, dreaded as it is by Roger Ebert.  Film critic Andrew O’Hehir, in introducing his top ten list for 2011, writes:

Crafting an annual top-10 list is no doubt a ludicrous exercise, and I’m not promising I’d have given you the same answers a month ago, or will give you the same ones a month from now. But over the years I’ve grown to appreciate the fact that it forces critics to stop hiding behind relativistic weasel words and high-flown rhetoric, and forces me to defend the murky and individual question of taste. The fact that I–ever so slightly–prefer “Coriolanus” to “Drive,” and “Mysteries of Lisbon” to “Uncle Boonmee Who Can Recall His Past Lives,” definitely tells you something about me as a person and a movie critic.

Indeed, as I argue in a previous post, we cannot help but respond to films subjectively.  Thus, on its own, any list of one’s preferred art objects is going to tell you more about the person making the list than about any universal criteria by which the art objects should be judged.  It can be valued for that reason alone.  Even if accompanied by strong rational arguments in support of the list’s ranking, this says nothing of its objective worth.  Perhaps this is Ebert’s gripe, as he claims (correctly) that lists “have next to nothing to do with the quality of movies.”

That being said, I believe these types of lists are valuable for another reason. Taken together, from a wide variety of critics, they can help us reach a usable standard by which to judge artworks.  The BFI Sight & Sound list of the top ten films of all time (the one list that even Ebert appreciates) is a good example of how this can be done effectively.

Every ten years, the BFI surveys a large number of film critics from all over the world and asks them for their individual top ten lists.  From these individual lists, the BFI compiles the definitive list of the top ten films of all time.  The ten films on this list become exemplars of the standard of taste exhibited by this group of critics.  I doubt that any two individual lists are identical (and you can view all of the individual lists if you do not believe me), but Citizen Kane is continually deemed the standard of excellence in cinematic art.  Kristin Thompson recently wrote a compelling argument against this fact, but even she concedes that Kane’s status appears to be cemented for the time being.  That’s not to say that tastes won’t change; they will, just as they did back in 1962 when Kane dethroned Vittorio De Sica’s Bicycle Thieves for the number one spot.

The BFI list and others like it are especially valuable for those who do not usually swim the murky waters of film criticism or know which critics might offer the most trustworthy opinions. For them, an aggregated “best of” list is an easy way to discover films that might be worth watching.  The two biggest review aggregators that will offer such lists are Rotten Tomatoes and Metacritic; in addition, Movie City News always creates a beautiful year-end chart from aggregated top ten lists. What the review aggregators do is take a film’s multiple reviews and give the film a score based on the critical consensus.  Thus, individual tastes can be merged into a single standard of taste, just as with the BFI lists.  People who want to get in on the conversation surrounding film would do well to follow these aggregators, check out their lists of the best reviewed films, watch the films, and then read the reviews.  In this way, one will learn the current standards of taste among critics, learn the arguments in favor of these standards, discover the critics with whom one’s own standard of taste might align (or misalign), and finally, if one wishes, take an active part in the community of criticism.  That is when the true fun begins, for with each new critic (if his or her opinions are heard and deemed valid by the rest of the community) comes a new chance to push the standard of taste in new and exciting directions.

Roger Ebert claims that “all lists are meaningless.”  Clearly, this statement is untrue.  Lists can be full of meaning, as long as there are people who read them and utilize them.  In the least, they are expressions of the tastes of those who have made them, whether an individual or a critical community.  Thus, they can tell us something about a person in the former case, and they can tell us something about critical standards in the latter.  In either case, the word “meaningless” does not apply.

2 thoughts on “The Meaning of Lists”