Skip to content
HomeHow Food Can Be Art: A Discussion of Taste (Part 3 of 8) 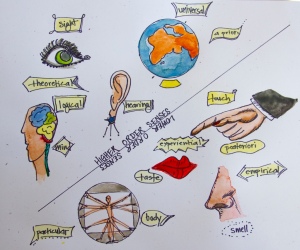 The Hierarchy of the Senses

In her book Making Sense of Taste, Carolyn Korsmeyer offers a detailed explanation as to how the hierarchy of the senses came to exist in Western philosophy and why it persists. In discussing the reasons why sight and hearing are afforded such higher value than taste, smell, and touch, she writes: “In virtually all analyses of the senses in Western philosophy the distance between object and perceiver has been seen as a cognitive, moral, and aesthetic advantage. The bodily senses are ‘lower’ in part because of the necessary closeness of the object of perception to the physical body of the percipient” (Korsmeyer Making Sense of Taste 12). In other words, sight and hearing, because of the perceived distance between these senses and their objects, give the impression of objectivity. Taste, smell, and touch, on the other hand, being intimately connected with their objects, are presumed merely subjective. Indeed, sight in particular is usually singled out as the noblest of the senses.

So why has sight been raised to such lofty heights and been accepted, along with hearing, as one of the only sources for objective knowledge? One possible explanation rests in our initial misinterpretation of visual data. In an essay titled “Nobility of Sight,” Hans Jonas writes:

Indeed only the simultaneity of sight, with its extended ‘present’ of enduring objects, allows the distinction between change and the nonchanging and therefore between becoming and being. […] Only sight provides the sensual basis on which the mind may conceive the idea of the eternal, that which never changes and is always present. (Jonas 513)

To be sure, through the senses of taste, smell, touch, and even hearing we perceive objects temporally, suggesting the transience of the world–becoming. Sight, limited as it is (inferior, even, to the sight of certain animals), incorrectly perceives stasis in the world–supposedly unchanging elements. Our eyes simply cannot detect every movement, every change (and many changes, such as those that result in vast rock formations, take enormous lengths of time to register sensory evidence that they have even been occurring), so we extrapolate the idea of the eternal, of being, from our ill scrutinized visual data. With this dualistic worldview in place, one side (being) is given precedence over the other (becoming). In Twilight of the Idols, Friedrich Nietzsche explains why this privileging of being over becoming came to be in Western philosophy. Discussing it as an idiosyncrasy of philosophers, he writes:

[…] it consists in confusing the last and the first. They place that which comes at the end–unfortunately! for it ought not to come at all!–namely, the “highest concepts,” which means the most general, the emptiest concepts, the last smoke of evaporating reality, in the beginning, as the beginning. This again is nothing but their way of showing reverence: the higher may not grow out of the lower, may not have grown at all. Moral: whatever is of the first rank must be causa sui. Origin out of something else is considered an objection, a questioning of value. All the highest values are of the first rank; all the highest concepts, that which has being, the unconditional, the good, the true, the perfect–all these cannot have become and must therefore be causa sui. (Nietzsche 481-2)

Returning to the subject at hand, Korsmeyer explains how this erroneous hierarchical structuring of being over becoming led to the parallel structuring of the “distance” senses over the bodily ones, and how this then led to other parallel hierarchical relationships: “As we see from the reasons Plato and Aristotle advance in their studies of sense experience, this hierarchy accords with the elevation of mind over body; of reason over sense; of man over beast and culture over nature” (Korsmeyer Making Sense of Taste 30). Thus, reason is associated with the mind; senses are associated with the body. Sight and hearing seem to perceive objects at a distance; they are subsequently associated with the mind and the intellect, as this distance affords them the capacity for reflection and reasoning. Knowledge follows from this intellectual activity. The senses of taste, smell, and touch, being intimately connected with the physical body, are by nature lesser in this construct. Because there is no distance between them and their objects, the application of reflection and reasoning is not thought possible. The sensations afforded by these senses are more immediate and subjective (e.g., pleasure or pain, delicious or disgusting). They cannot be sources for knowledge–or beauty.

Kant: How the Sense Hierarchy is Applied to Aesthetics

In an essay titled “Can a Soup Be Beautiful? The Rise of Gastronomy and the Aesthetics of Food,” Kevin W. Sweeney explains the prejudice that philosophers show toward taste and food in particular by discussing Immanuel Kant’s view of the sense. He writes: “Kant suggests that gustatory experience cannot offer a reflective aesthetic encounter. What we eat or drink provokes only an agreeable or disagreeable sensory response. Consequently, no object of gustatory experience can be beautiful” (Sweeney 121). For Kant, an aesthetic response must be a “disinterested” one. Food, as something that will satisfy a bodily appetite and provide nourishment, cannot create a disinterested aesthetic response in a subject. Also, Kant believes that beauty is a value present within objects and which rational minds can access universally and objectively. Korsmeyer explains it this way:

Partly because aesthetic pleasure is disinterested, it is available to all on the same terms from the same objects. We expect judgments of Taste to be shared by others. Not only are aesthetic pleasures universal, Kant notes that judgments of Taste have a kind of exemplary necessity: because they are based on features of the mind that are universal, all perceivers ideally concur in the apprehension of the beautiful. (Korsmeyer Making Sense of Taste 55)

Clearly, there are two issues that Kant raises that need to be addressed in creating the possibility that food can be beautiful (and thus art):

To address these issues, I will examine the evidence of the gastronome Jean Anthelm Brillat-Savarin and the empiricist David Hume.